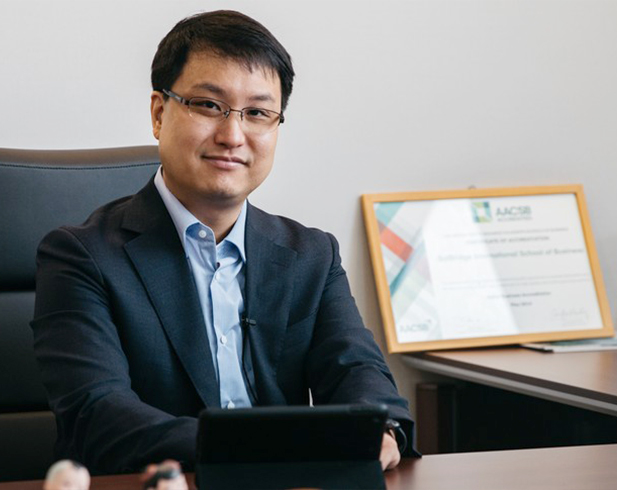 Dean Joshua Park was appointed as Dean of SolBridge International School of Business in August 2021.

He previously served as the Associate Dean of Undergraduate Studies, Director of BBA Program, and the Director of Debate and Negotiation Programs. As a professor at SolBridge since 2010, he was also a top-rated teacher in several courses such as Business Negotiation, Business Law, Legal Environment of Business, and Critical Thinking.

A graduate of Harvard Law School, his extensive experience in negotiation, debate, and mediation is reflected in the books he authored, his research, as well as over 300 domestic and international seminars and workshops he’s been featured at.

To many, Dean Park is known for his passion for debate and its proliferation. His recognition in the debate world transcends geographical boundaries. He is a board member of the World Schools Debating Championships, Ltd. and has been an active coach and adjudicator at major intervarsity and schools debate competitions globally. Most importantly for SolBridge, Dean Park was instrumental in establishing SolBridge Debate Society (SDS) as one of the most achieved entities in Asia.

As Dean, he aims to follow the 4 I’s--Innovation, Inclusion, Integration, and Internationalization--ideals that have defined SolBridge as well as his own educational philosophy, with the welfare and success of our students first and foremost in his mind.

Led by the Dean, the Executive Committee sets and executes the strategic direction of the school, in close coordination with governance bodies.

The mission of SolBridge Advisory Board is to advise the dean and the executive committee on key strategic and managerial issues.