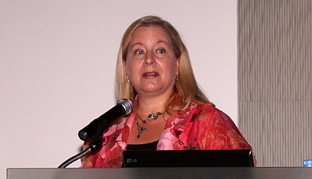 The SolBridge student body and faculty were treated to a very special Platinum Series Lecture by the President of the American Chamber of Commerce in Korea, Ms. Amy Jackson, which was also the twentieth lecture in this esteemed lecture series at the school.

For nearly an hour, Ms. Jackson talked about the role that the American Chamber of Commerce has played in Korea for sixty years from providing a conduit for businesses to establish ties in Korea to playing an integral role in promoting the Korea-US FTA. She offered insights into not only the history of the American Chamber of Commerce in Korea, but also their achievements.

“We are a fully private entity non-profit we are member oriented membership spans all sectors,” Jackson explained. “We represent the interests of our member companies.”

One of the things she noted was how much Korea has evolved and changed over the years and what that means for the continuing role the American Chamber of Commerce plays in Korea.

“We are seeing new patterns of trade and ownership,” she explained.

However, it’s not all about providing member companies with information about how they can invest in Korea.

“We do a lot of corporate social responsibility we give back to society it's in our DNA,” she said. “Moreover, we promote access for professional Korean women.”

Without question, one of the most important roles that the American Chamber of Commerce has played in recent years was being the vanguard for promoting the Korea-US FTA, both in Korea as well as in the United States. She talked about the importance of the FTA that Korea and the United States have.

“There is a lot more meat to an FTA than just tariff reductions,” Jackson said.

At the forefront was the challenge to convince leaders to pass a FTA.

“Convincing stakeholders why an FTA is important for a country’s economic interests,” she said.

She also briefly discussed why Korea is such a vibrant and dynamic economy from an internationally-minded population to sophisticated consumers.

“Korea is emerging as a leader in many ways and in new areas,” she said, “by working together with other countries on many global challenges.”

Finally, she offered some advice for students when they return to their homes.

“You will be applying a unique role going back to your countries and talking about Korea,” she said. “There is a strong lack of information about Korea. You have a strong role to play.”