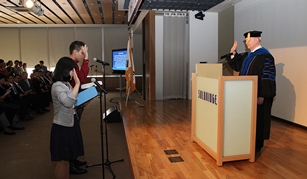 While the origins of the word would make any etymologist smile with pleasure, at SolBridge, the word has a more auspicious meaning which is the beginning or the continuation of one’s academic journey. And on Friday, August 22, the fall 2014 semester officially got underway, albeit a few days early, with the Welcome Convocation in the 4th floor auditorium.

Presiding over this most prestigious event was Dr. John Endicott, President and Vice Chancellor of SolBridge and Woosong University. In his opening remarks, he welcomed the freshmen class—one of the largest freshmen classes at SolBridge—and reminded everyone to work hard and to make the most out of their time at SolBridge. He also talked about two major events which occurred last spring, the most significant one being SolBridge’s AACSB accreditation and the need to continue to work hard.

President Endicott also welcomed and introduced the new Dean, Dr. Jin-sung Kim who echoed the same sentiments in his address to faculty and students about the need to work hard and not to rest on the laurels of our past successes. He also emphasized the importance of everyone helping each other in the coming semester.

Likewise, Chairman Sung-kyung Kim, in his address, emphasized the need for our international students to study Korean hard and to learn much about Korean culture while they are at SolBridge.

During the hour-long ceremony, the freshmen class took an oath of admission, scholarships were awarded to six students (BBA and MBA), and a special award was given to one of the peer group leaders responsible for her team’s immersion/team building success during orientation week. Students from one of the team building groups presented their captivating presentation which highlighted how they overcame the many challenges of orientation week.

Now that the fall semester has officially gotten underway, students will soon be hitting the books and participating in a wide range of events from the upcoming Clubs Expo to the SolBridge Culture Day—promoting sound minds and sound bodies. This semester will also be special for everyone at SolBridge because this year also marks the sixtieth anniversary of the Woosong Educational Foundation. There are a number of activities planned including an international case study competition at the end of September.

Through it all, our students will be reminded time and time again of the five pillars which make up GACCS as they strive through dedicated and passionate instruction and study to become the next generation of Asian thought leaders.