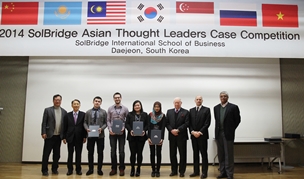 A real world problem from a company in Korea was given to the students during this competition. Students presented their solutions through analysis and team work under the guidance of SolBridge professors. In addition, SolBridge professors also judged the competition. The objective of the case competition is to educate the Asian Thought Leader, enhance collaborations among international business schools and create a global network.

With only two days to prepare for the competition, the students who were put into six teams, worked hard to present their presentations on the final day of the competition. The competition was intense and the judges had their work cut out for them choosing the top prize which was awarded to Shokhrukh Jobborov representing SolBridge; Alexey Alexandrovich Didkovskiy representing Saint Petersburg State Polytechnical University; Nadhirah Azman representing Universiti Kebangsaan Malaysia; and Minju Park representing BFSU-SolBridge. In addition to an award certificate, the winners are also eligible for a scholarship worth seventy-percent should they decide to pursue their MBA studies at SolBridge.

Second and third place winners also received sixty and fifty percent scholarships respectively for tuition and fees if they also decide to study at SolBridge for their MBA. All participants received certificates of appreciation for being part of this inaugural SolBridge Asian Thought Leader Case Competition.

Our congratulations go out to all the winners and participants and we look forward to the next SolBridge Asian Thought Leader Case Competition.