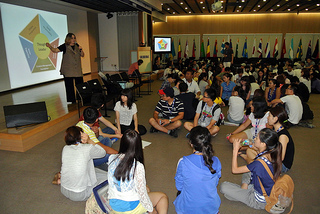 Although SolBridge’s convocation ceremony, held on the first day of the semester, “officially” begins the semester, the “unofficial” beginning of the fall or spring semester starts with the week-long Team-Building Orientation/Immersion Program.

The Fall 2012 Semester got underway on August 20th with a welcome ceremony for new students. During the ceremony, President and Vice Chancellor, Dr. John Endicott, Vice Dean Dr. Patrick Leonard, Associate Dean Tonatiuh Najera Ruiz and others welcomed the students to SolBridge.

It would be the last chance for students to relax because for the next four days, the students and their peer group leaders would run the gamut of immersion activities to help them adjust to Korea and SolBridge as well as prepare them for the upcoming semester. First up on Monday was a session on culture shock as well as an activity designed to acquaint them with the SolBridge’s mission of educating the next generation of Asian Thought Leaders and GACCS. During these activities, students not only got to meet their classmates, but also learned about their respective countries.

On Tuesday, following an overview of Solbridge by Associate Dean Dr. Ruiz, students got a valuable lesson in teamwork when their orientation teams built bridges using only newspapers and duct tape. And then, to test the durability and strength of those bridges, students had to see how many bricks they could stack on them.

It wasn’t only activities to help them overcome culture or build bridges, either. During their week-long orientation, students took care of a lot of business from attending information sessions, having a medical check, taking language tests, and finally, registering for classes. Although it probably seemed a lot to most students, the peer group leaders made sure that all the students could keep up and make it through the week.

Finally, an intercultural art project and presentation on the last day rounded out their intense and exciting first week at SolBridge. Working in teams, the students designed a banner, motto, and language for a fictitious country and presented it to the all the students.

While orientation week at SolBridge helps students adapt to a new culture and life at SolBridge, it is the first step in preparing students for the next generation of Asian thought leaders.

Back
Previous Realizing your Full Potential Next Fall Clubs Expo