Sustainability of the Tata Group 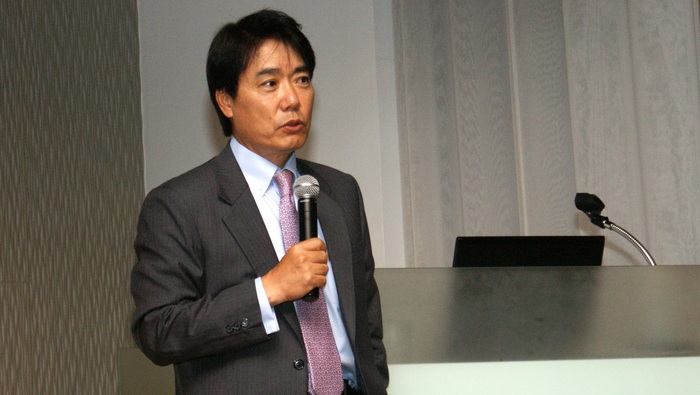 To be a successful CEO in today’s ever changing global business world, one needs more than a good education. One must be a visionary—not just coming up with some great idea, but according to Mr. Jong-shik Kim, CEO of Tata-Daewoo, one has to be able to look into the future.

“It takes about five years to conceive and come up with a product,” Kim said, during the final lecture for the spring semester and the 15th Platinum Lecture. “It’s kind of scary when you have to think ahead five years and hope that the market will like this product. What if they don’t appreciate this product when it comes out? It can be a daunting task to do it right. It is very exciting given the risk and the challenges.”

Speaking before a packed auditorium, Kim shared his personal insights on how to be successful by looking at three things. Although he talked about his experience at Tata Daewoo and the sustainability of the Tata Group, the practical advice and observations he shared with the audience could be applied to any business setting.

In addition to being able to look ahead to the future, Kim, who drew upon his success at Tata-Daewoo, told the audience that it is very important to know your product. To be sure, when Tata Daewoo came out with a new commercial vehicle, Kim decided that the best way to show the product to the public would be to drive the vehicle himself.

However, there was one small catch: he had to get a special license.

“I had to register in the driving school and it was during summer. Not a really good time to get this license,” Kim said laughing. “Anyway, while I spent my time learning how to drive people noticed me, and wondered, who was this middle aged man with a tie on. Some people assumed I must have lost my job because I was wearing a tie.”

The whole point of Kim’s amusing anecdote was that he wanted to make a statement to his employees.

“When I became the CEO, I gathered all my employees together and asked them if they had a license to drive our heavy duty trucks,” Kim said. “I told them, if you don’t drive the product, in this case, one of our heavy trucks, how can you sell it to our customers? After all, if you make a BMW, wouldn’t you want to drive it? If you make coffee, like Nescafe, wouldn’t you want to drink it?”

Planning ahead and knowing one’s product were just two of points that Kim discussed and stressed during his hour-long lecture. The third point that he shared with the audience focused on Ratan Tata, the current chairman of the Tata Group.

“What is management? What is sustainability?” Kim asked the audience. “It is the personality of the leader.”

Kim shared a story about Tata and how Tata wanted to design a car which is safe to drive for the average Indian family. Although Tata was only talking about manufacturing such a car, a new story broke saying that the Tata group was coming out with a new car. Tata, not one for going back on his promise, had no choice but to come out with this new car, no matter what the cost. The decision was driven by the leader’s personality.

“A promise is a promise,” Kim said. “That’s what can sustain a corporation.”

Kim concluded by offering two other examples of how the personality of a company’s leader can sustain a company as well as the importance of keeping one’s promise.

“If companies and business people around the world believe in this the world will be a better place,” he said.

Back
Previous Global Sourcing Worldwide of Services: Bridging the Economic Divide Next No next articles.