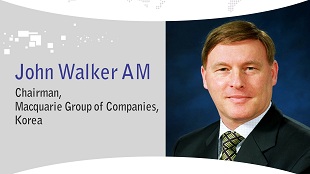 The key to success in today’s ever-changing business world, according to John Walker, Executive Director at Macquarie Group Limited and Chairman of Macquarie Group of Companies, Korea is diversity.

“We should be constantly innovating and changing,” Walker said, “because the market is not static.”

Speaking before a packed auditorium on November 8, 2011, for the 12th Platinum Series Lecture, Walker talked about the history of the Macquarie Group, their inroads into the Korean market, as well as offering advice to students for how they can achieve success in today’s business world.

In 2011 Walker assumed the additional responsibility, Head of Infrastructure Asia for Macquarie Capital. In 2000, Walker established Macquarie’s Korean business with only five staff. It now comprises 10 businesses with over 300 staff and has grown into a leading provider of investment banking services in the Korean market.

“We’re not just an investment bank but a provider of services,” Walker said. “We just don’t give advice. We invest and develop assets.”

To be sure, Walker pointed out that the secret to Macquarie’s success has been its ability to diversify. Every day 100 million people use essential services provided by Macquarie managed businesses from transportation (airports, roads, and rail) and communications to utilities (gas, water, and electricity) to aged care/retirement facilities.

“The diversity of our income has been the secret to our success,” he said. “It is also the story of the future and the key to our continued success.”

One of the things Walker stressed the most in his forty-five minute presentation was the importance of people in a corporation.

“Initiatives come from the people in our ranks,” Walker said. “Our strategy is all about people.”

When Macquarie first tried to break into the Korean market, one of the first things they needed to do was how to distinguish itself from other major global players already firmly entrenched in the market.

“We had to differentiate ourselves,” Walker said. “We needed something that added value to the market.”

This point of differentiation explained Walker, which added value to the market, could not have been achieved had it not been for people who looked at a market like Korea and came up with an initiative to enter it.

“This comes from a management culture that supports initiative,” he said, “and that idea that ‘I think we can make it.’”

Likewise, Walker emphasized that the key to any company’s success in a foreign market is its ability to adapt.

“You have to know the region and know the market,” Walker said. “However, do not compromise on risk management or culture.”

In looking at the Korean market and the success that the Macquarie group has had here the past eleven years, Walker

“You have to think big picture and where you are going,” Walker stressed. “More than that, you have to think outside the box, to facilitate creativity, and to articulate the vision.”