Revolution and Innovation in the Electronics Industry 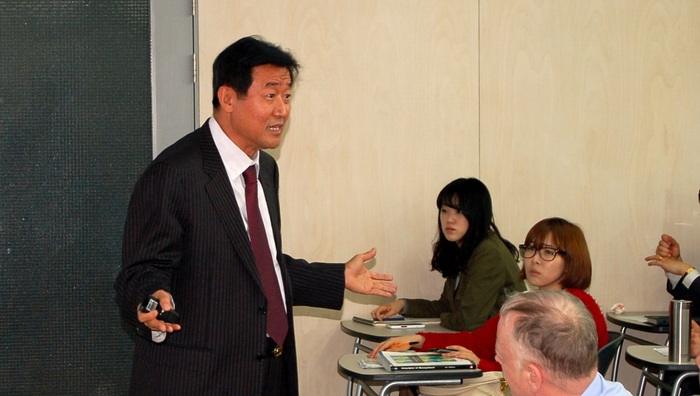 These days, when most people think of the electronics industry around the world, there are two Korean companies which stand shoulder-to-shoulder, LG Electronics and Samsung. However, this was not the case forty years ago.

“If you came to the United States or any other country in the 1970s, there was no sign of LG, Goldstar, or Samsung. It was Zenith, RCA, Magnavox, General Electric, and Westinghouse. And if you went to Europe, it was Grundig, Saba, or Phillips,” said Nam Kyun-woo, former President of Electronics and its current advisor. “Where are they now? Most of them disappeared. Of course, General Electric and Phillips are still there, but they have no consumer electronic industry. What happened to our electronics industry?”

Nam, who is currently serving as an advisor to LG, gave an inspiring talk to SolBridge students and faculty about the electronics revolution which has taken place since the 1970s. During his spirited and informative talk, he offered insights into LG’s success as well as how the digital revolution affected Korea.

“When I started working in this industry in the 1970s, a Toyota Corona and a twenty-five inch color television set sold for the same price,” Nam said. “That should give you some idea how much the industry has changed.”

Without question, the electronics industry the past forty years has been very competitive and he likened this competitiveness to the saying that “if you sleep at night, somebody will take your nose.”

“The technology revolution has happened so fast,” he said. “I was very lucky to be in this industry along with Samsung to be able to take control of it.”

Recognized around the world as a visionary leader in the consumer electronics field, Mr. Woo has been honored by the Korean government with the Golden Tower Order of Industrial Service merit award, the highest honor recognizing outstanding achievement in the Korean electronics industry. Other honors include Honorary Citizen of Nanjing, Jiang Su and of Huizhou, Guang Dong and the Korean Management Association’s New Millennium Award.

From 2000 to 2004, as President and CEO of LGE’s Digital Display and Media Company, Nam led the transformation of LG Electronics into a global consumer electronics brand, while establishing the company as a world leader in flat-panel plasma and liquid-crystal displays, optical storage devices and digital television. In addition, he served as President of LGE North American operations and LG Electronics USA, Inc., based in Englewood Cliffs, N.J., from 1995-2000. When LGE became the majority owner of Chicago-based Zenith Electronics Corporation, Mr. Woo also served on Zenith’s Board of Directors beginning in 1995.

Despite Nam’s successful career, it was not an auspicious beginning for the future president of LG.

“When I started to work for LG in 1974, I was assigned the Zenith account. My first job was to go to the airport and meet Zenith’s purchasing officer who came to Korea on business,” Nam said. “I had to help him claim his baggage and help him check in the hotel instead of being a part of this important meeting.”

Later, Nam had to wait for the meeting to be over and then take the buyer back to the hotel. Afterwards, Nam went back home which was in a small town outside of Seoul.

“Back then there was a curfew and I was always stopped by the police,” Nam said laughing.

Twenty years later, LG took over Zenith. At the time Nam was the president of European operations and was appointed to be in charge of Zenith electronics.

“Would you believe, the person whose bag I carried in 1974 was still sitting there as a vice-president of purchasing but I never tell him to carry my bag,” Nam said smiling. 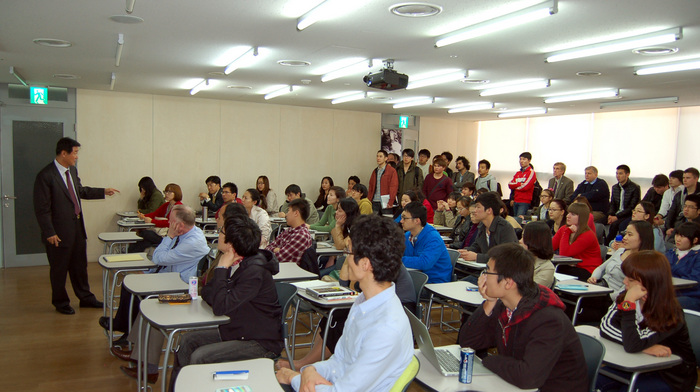 One of the main points of Nam’s presentation was that unless you are “hungry” for change, or at the very least, cognizant of those factors which bring about changes, in this case the electronics revolution, you might miss out on something big. To illustrate his point, he talked about Jack Kilby, the father of the integrated circuit in 1958 and the handheld calculator (and later winning the Nobel Prize in Physics in 2000).

“Nobody paid any attention to what this technology meant to them. Most of the CEOs of the consumer electronics industry were either a CPA or lawyer and were mainly concerned with protecting their own interests,” Nam said. “It was a Japanese company, Sony, which took this idea of an integrated circuit and made the first portable radio. The most likely reason why this technology was not adapted by Zenith, RCA, Magnavox, and others was because they were not hungry.”

Aside from the development of the integrated circuit and the growth of the PC industry, the most dramatic example of the evolution of the electronics industry has been with mobile phones. Although America once held the competitive edge in telecommunications with Motorola by the end of the 1980s, this was about to change, according to Nam.

“If it wasn’t so competitive, I believe that we couldn’t build LG and Samsung the way they are today,” Nam added. “You are blessed if you are hungry.”

Looking back on almost forty years in the electronics industry, Nam believes that it was a combination of this hunger for success and a bit of luck which enabled LG to prosper as much as it has over the years.

“We were very lucky in the beginning,” he said. “If we knew how to make televisions, we knew that we would be okay.”

Finally, Nam left students with some advice for making it in the business world once they leave SolBridge.

“The most important thing is your vision and scope not to make the mistake of the past,” he said. “You should know what kind of change is coming. Please never forget that.”