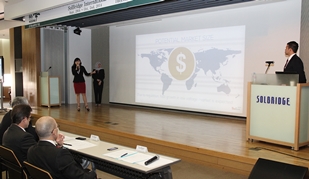 With the theme of an Asian company growth strategy in a globally competitive environment, the SolBridge International School of Business held an International Business Case Competition as part of the Woosong Educational Foundation’s 60th anniversary celebration.

The three main objectives of the competition were: educate the Asian Thought Leaders in the world; enhance collaborations among universities in the world and create a global network. Students from six universities participated in the competition: Hunan University, and Nanjin University, China; Prasetiya Mulya Business School and Universitas Islam Indonesia, Indonesia; University of Tromso, Norway and SolBridge International School of Business, South Korea.

During the three-day competition a real world problem from a Korean company was given to the students. The real life problem, which was outlined by Dr. Won Tae Jo from LG Chem, was for students to come up with a business plan and marketing scheme for two types of fast charging stations for LG Chem’s Li-ion batteries for electrical vehicles. The idea was that it would be the kind of presentation which would be given to investors at a Silicon Valley meeting.

On the third day of the competition, students presented their solutions through analysis and team work which were judged by three SolBridge professors before a standing room only audience. All of the students who participated did an exceptional job presenting their solutions which made it all the more difficult for the judges to select the three winning teams:

SolBridge International School of Business would like to extend its thanks to all those who participated and its sincere congratulations to the winners.