SolCaring Volunteer Club: Giving Back to the Community 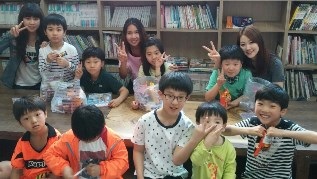 SolBridge prides itself on its five pillars for preparing well-rounded, creative, ethical, socially responsible and cross-culturally competent business leaders. This past semester, students took one of these pillars, social responsibility, to a new level with the creation of the SolCaring Volunteer Club, which has quickly become one of the more popular, if not successful clubs at SolBridge.

Recently, the club held a fundraiser (to commemorate Children’s Day in early May) for local orphanages. Faculty and students dug deep into their pockets and contributed over one million won.

“I'm absolutely amazed and grateful for the amount we collected and I would like to report what we did we the money,” said Mirella Oliveira, SolCaring Volunteer Club President. “With that amount, we were able to buy school supplies (notebooks, pencils, eraser, pen, and highlighters) and an amazing pack with many snacks we carefully picked for 130 children.”

Students went to each center where SolBridge students volunteer and handed over the gifts to each kid to celebrate their Children's Day, which happened at the beginning of May.

“The center coordinators and kids were absolutely blown away and very very happy with the gifts,” Oliveira said.

SolCaring members volunteer in five disadvantaged children centers around Daejeon as well as the local homeless center. The club members are committed and weekly dedicate part of their day to help the community.

Back
Previous Graduation Ceremony Next You Must Market Yourself!