Reflections on Twenty Years in Congress and US-ROK Relations 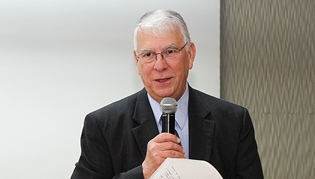 The story of South Korea’s remarkable development and growth, rising up from the ashes of the Korean War, to become one of the world’s leading and vibrant economies today, can be applied to anyone who has a dream and pursues it, a former U.S. Congressman told faculty and students during the school’s 18th Platinum Series lecture.

“The story of Korea is the story of each of you,” former Illinois Congressman, the Honorable Donald Manzullo said. “Anyone who has a dream can make something happen.”

During his highly informative and insightful lecture which touched about his career in congress as well as his present position as the President and the CEO of the Korea Economic Institute of America. He offered insights on Korea’s economic development and the manufacturing and economic hub it has become today. One of the things he talked about was how fast Korea was able to recover and develop following the Korean War.

“This all happened in two generations,” he said. “I want you to think how significant this is. How did they do it?”

Using the story of Korea’s amazing story, Manzullo touched upon some ideas which resonated strongly for our students: to add value to the world and to recognize one’s talents.

As a member of Congress, Manzullo pointed out that he looked at the peninsula a lot different than my colleagues.

“I wanted to associate myself with a country that had a lot of things going on,” he said.

When asked by one of students what his greatest accomplishment was serving in the Congress, Manzullo replied, it was serving the people

“Helping the people means more to me than anything else,” he said. 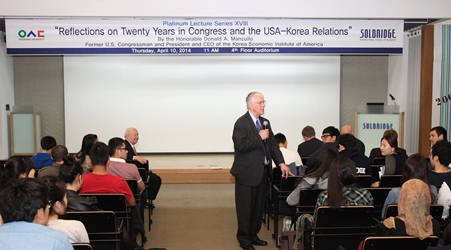 Back
Previous Georgia Tech Bound Next Platinum Lecture - Reflections on Twenty Years in Congress and the USA-Korea Rel...