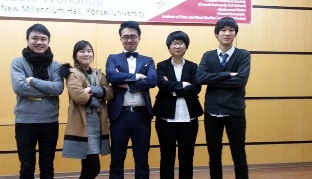 On March 12-16, six of our students from the SolBridge Debating Society (SDS) attended the 23rd International Christian University International Debating Tournament (ICUT) in Tokyo as debaters and adjudicators. This is one of the oldest and most prestigious international tournaments in Asia, featuring debaters from Korea, Japan, China, Taiwan, Hong Kong, Macau, Malaysia, Philippines, and Thailand, as well as debaters from outside of Asia such as the UK and USA.

It is a tournament that allows registration of "open teams," meaning teams may consist of students from different institutions as well as individuals who have graduated. As such, the tournament routinely features several "All-Star" teams of current and former student debaters (e.g. one team this year featured a former Worlds Champion and Chief Adjudicator, a former Asians Champion and Chief Adjudicator, and a Korean Nationals Champion to round it off).

SolBridge sent one composite team of two of our students (Harah Jeon, Jiwon Kwak) joining forces with a student from Yonsei University and one full SDS team (Nala Lee, Jiwoo Kim, Taejo Kim), with Minjeong Kim participating as a judge.

At the end of six preliminary rounds, the composite team featuring Harah and Jiwon had a record of 5-1, the lone loss being on a hotly contested 2-1 split decision against Hong Kong University. The team also distinguished itself by having the second highest margin of victory in the competition, meaning that their wins were quite decisive. In the elimination rounds, the team proceeded to defeat a composite team featuring two top Japanese debaters and a Korean debater from Ewha Womans Universty in the Octofinals.

Their impressive run came to an end in the Quarterfinals, coming up short on a 4-1 split decision in a closely contested debate against the eventual Champions, a composite team featuring a former Japanese champion along with two other top debaters from Oxford and Tokyo University. The final ranking for our team was #6 overall in the field of 70 teams.

While the team was disappointed at not going farther, they continued the tradition of SDS students performing well in top level international competitions. Our team featuring our younger debaters, while falling short of the break, also held themselves well against intense international competition, which bodes well for their future as debaters and students. We hope this is the first of many good reports from the debate team this year, as it continues to build the SolBridge brand as a debating powerhouse in Asia.