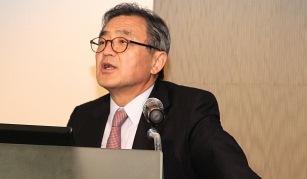 Our Special Lecture series for the fall semester kicked off with an unforgettable one when Dr. Kil-choo Moon, the President of the Korea Institute of Science and Technology (KIST) spoke to the student body and faculty on September 3rd in the fourth floor auditorium.

In his lecture, “Time to Share Our Experience,” Moon talked about South Korea’s rise out of the ashes of the Korean War to become one of the leading economies of the world today. Paralleling what was happening in America at the same time of South Korea’s rise, Moon highlighted fifty years of South Korea’s industrial revolution and showed how the country was able to develop as quickly as it did through the synergy of science and technology.

During this period, which many would later call South Korea’s rise as the “Miracle of the Han,” the country would have to overcome many obstacles such as the democracy movement, the 1997 Asian Financial Crisis, and the 1998 Global Financial Crisis. However, as Moon continually stressed, the country was able to succeed because it had a vision.

Throughout his presentation he went back to the concept of what it takes to have a fusion. Much of Korea's success was due to having a vision. Government action and regulations needed to realize some of these visions.

“We planned for what we should do,” Moon said in reference to how South Korea developed its automobile and shipbuilding industry. “It was necessary for us to have a clear goal setting.

Part of that clear goal setting as Moon emphasized was in their five-year economic plans and the development of the science and technology infrastructure which was crucial for these plans and visions to be turned into a reality. As such, the economic miracle maybe wasn't a miracle after all. Korea had a plan and vision all along when one considers the country’s five year economic plans, the growth of science and technology, rapid industrialization, application oriented technology, actively importing technology, visionary leadership, and early investment.

Although Moon talked at length about South Korea’s industrial revolution, much of what he touched upon could be applied to students studying at SolBridge in terms of the importance of having a plan and a clear vision for one’s educational pursuits. And in many ways, the students of today have more opportunities and resources to achieve them.

“Your thinking going to be much freer than mine in the future,” he laughed.

Finally, Moon emphasized the need for a convergence of science and technology along with culture, global leader convergence and vision for the future.”

“We can make a better world,” he said.