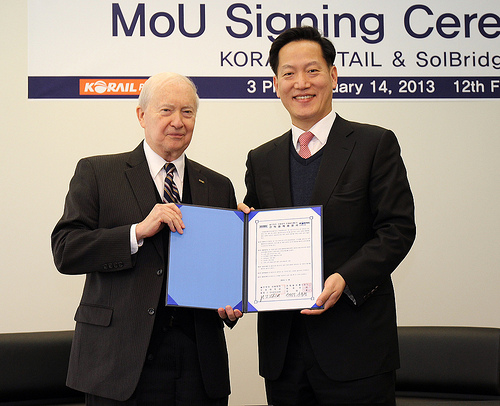 On January 14, 2013, SolBridge International School of Business and Korail Retail Co. signed an MOU. This agreement was made between two institutions for successful cooperation for both sides’ development and common interests and to provide SolBridge students with internship and job seeking opportunities. Described below is a brief company profile of Korail Retail.

Korail Retail was established in 1936 as a result of the Railroad Incarnation Association. It has led its way into the railroad-based distribution industry as the company operates convenience stores (Storyway), vending machines and shops in railroad stations. These are Korail Retail’s main businesses:

The company makes the customer satisfaction as their highest priority by providing high value products and convenient service and strives to be the global leader in the distribution and advertisement industry. As a result, it ranked top 10% by public organization CS evaluation. Besides their business operation, Korail Retail devotes its efforts to sharing with neighbors and making the world a better place to live through various social contribution activities such as welfare for single mothers and children, and charities, cash/goods donations, lunchbox deliveries for senior citizens.