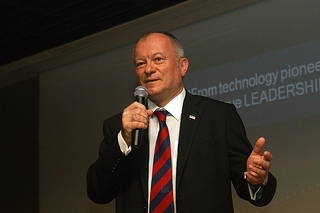 The fall 2012 SolBridge Lecture Series got off to an inspiring start with a highly motivational talk about how to realize one’s full potential in today’s ever changing and competitive business world.

Drawing upon the global success of the Robert Bosch Company, Hermann Kaess, President and CEO of Robert Bosch Korea Ltd., shared his insights on what it takes to be a global leader as well as how to be a successful manager.

“You need to sometimes step back and look at yourself and where you are headed,” he said. It is worthwhile to look at your own life from time to time. One day you might realize not very much has been fulfilled.”

During his talk, Kaess highlighted some of SolBridge’s values which he sees are key for attaining success.

More importantly, though, Kaess urged students to never lose sight of those values once they leave SolBridge.

“You should always be aware of what you do and be responsible,” he said.

He talked at length about the history of Bosch and how the company became a global leader in such areas as automotive and industrial technology as well as consumer goods. Since their founding over one hundred years ago, the company’s driving force has been the vision of their founder, Robert Bosch who believed that it was better to lose money than trust.

“He did not just say things,” Kaess said. “He believed that we had to bring value to society.”

Much of what Kaess talked about in regard to Bosch’s values such as quality and reliability, demonstrating initiative and innovation are somewhat similar to SolBridge’s core values. Additionally, he believes that we should trust the younger generation and what they are capable of doing.
“I believe that we should give students freedom and trust,” he said. “We should see what they are capable of doing.”

He left the students with a story about a farmer who came upon an egg on the road one day. The farmer put the egg in his pocket and took the egg back home. Once back home, the farmer put it underneath one of his chickens. A few days later, the egg hatched and the bird inside turned out to be a baby eagle.

“The mother hen raised the baby eagle as if it were a chicken,” Kaess said, with a twinkle in his eye, “and the eagle grew up believing it was a chicken.”

Kaess went on to say that one day this baby eagle, still thinking that it was a chicken looked up into the sky and saw a great eagle soaring high above. This young eagle was so impressed and wished that it could be an eagle one day.
“You too, should be like that young eagle,” Kaess said, “to realize and develop your full potential.”

Back
Previous Wiseman Lecture Series I - the 21st Century Global Talent and The Consilience of... Next Fall 2012 Team-Building Orientation/Immersion Program